We’ve done it again! My blogging friends and I have joined together to bring you another DIY challenge and this time we’ve added a few new faces! Just like last time with the Great Crate Challenge, we were to take one specific item and each make it our own. This time we were each challenged to put our own spin on these craft pumpkins from Michael’s. This was so much fun and I am blown away by the creations that my buddies came up with. Be sure to check out the links to their projects at the end of the post. 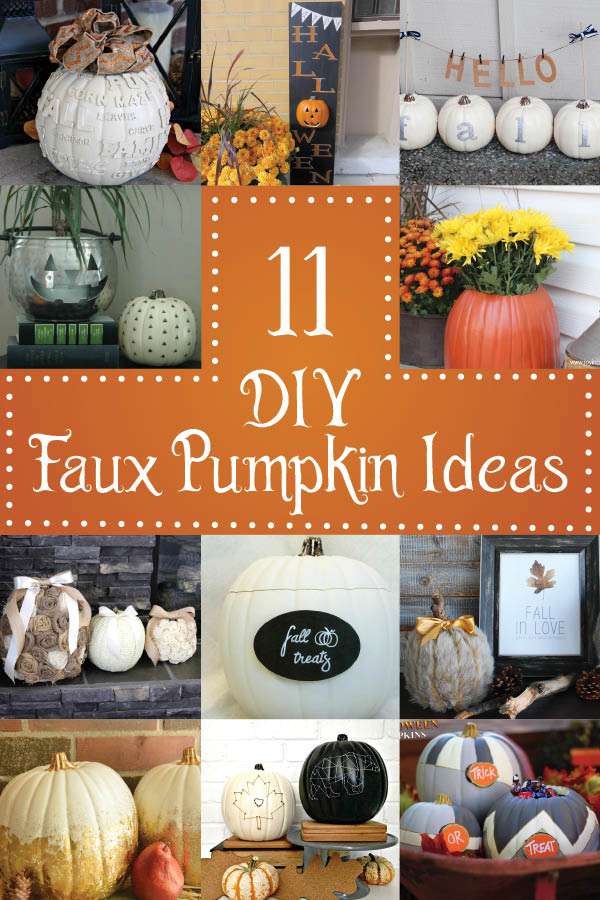 I decided to go a little glam with mine and attempted an ombre gold leaf and glitter design. It didn’t turn out exactly as I envisioned but it’s close and I still think it looks pretty darn cool. Bling! Bling! 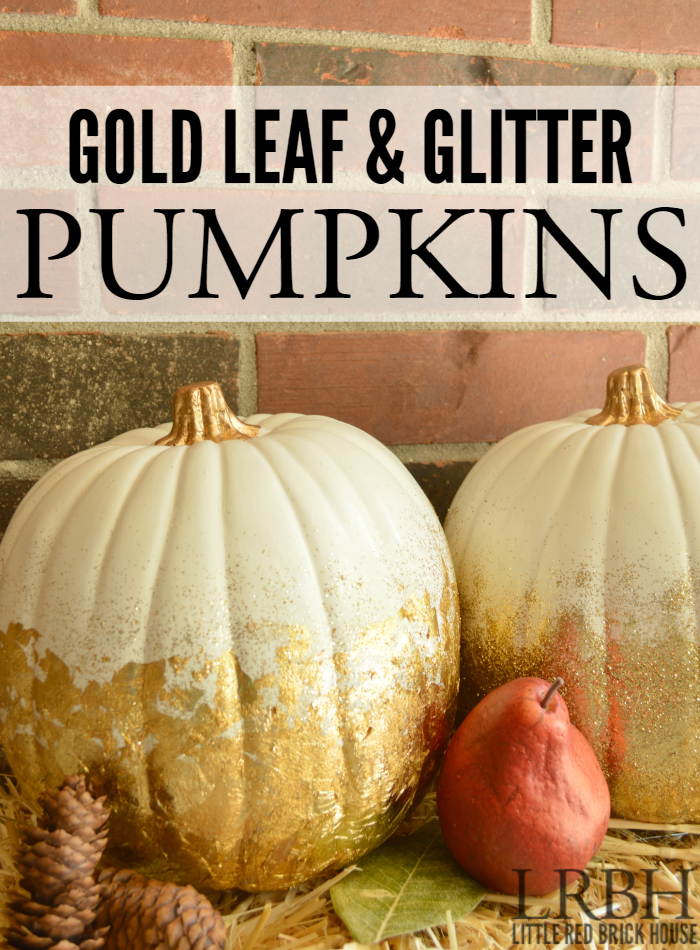 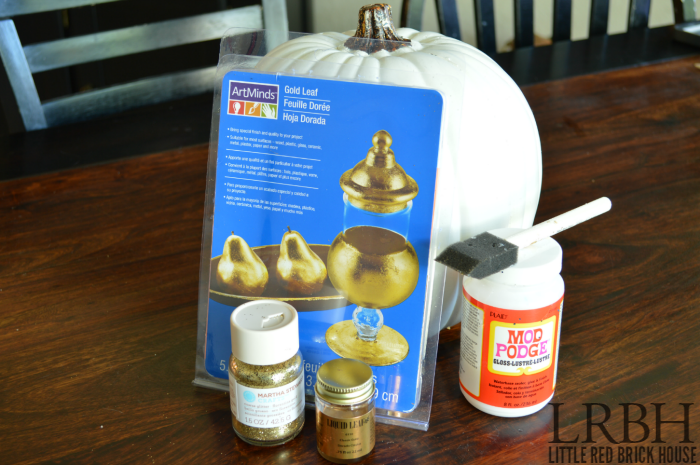 I wanted my gold leaf to fade into gold glitter and then the white of the pumpkin. My local Michael’s was all out of white pumpkins so I just snagged some orange ones and gave them a coat of white paint. 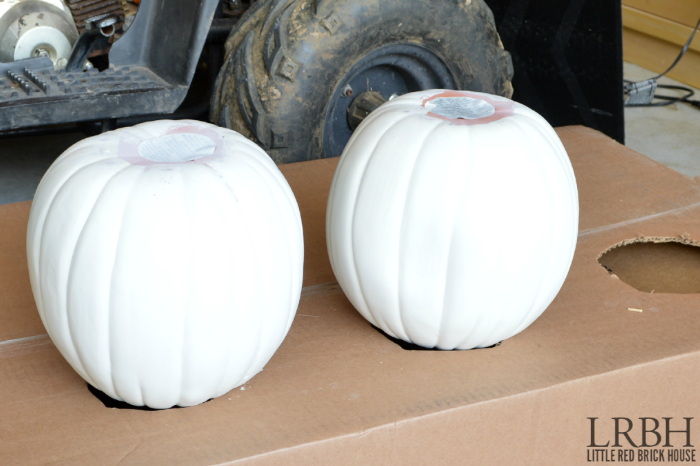 Once that was dry, I painted liquid gold leaf onto the bottom third of the pumpkins and let it dry completely. Let me tell you, that stuff is stinky! I wanted to have a gold background behind the gold leaf sheeting just in case the pumpkin part showed through. 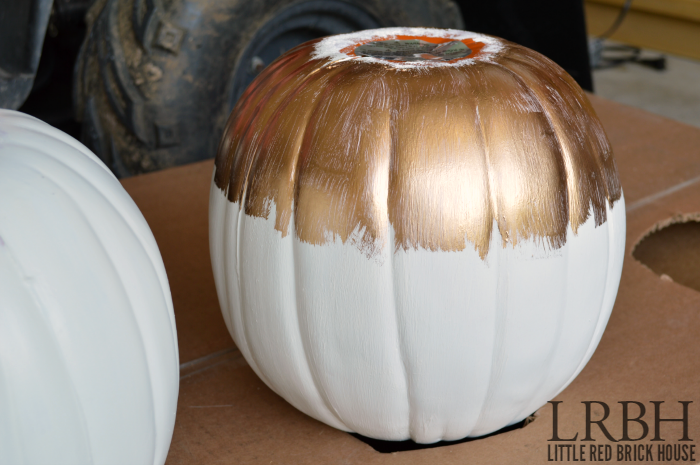 Next I began the painstaking task of applying the gold leaf. I brushed a light layer of Mod Podge over the gold leaf paint with the craft brush and began applying the gold leaf sheets in little sections. This was the hardest part of the whole project. The gold leaf is so delicate and sticky. Especially if your fingers are covered in Mod Podge, which they will be. Trust me. I just tried to gently lay a piece of gold leaf over the Mod Podge and then gently patted it into place with the foam brush. The excess Mod Podge on the brush will help to keep the sheet in place. 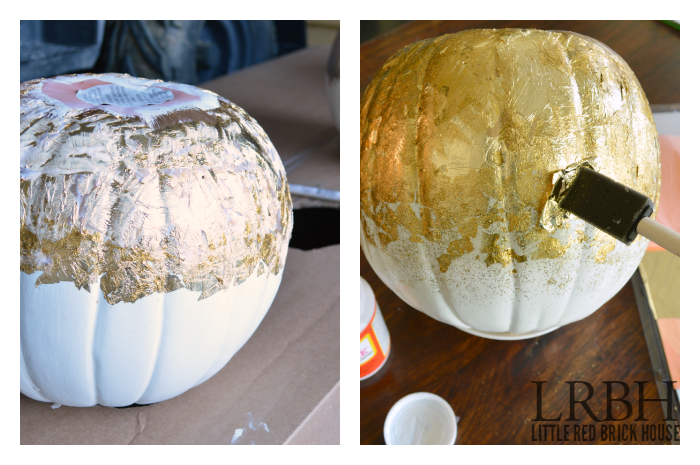 When the gold leaf was dry, I brushed another light layer of Mod Podge over the part where the gold leaf meets the white of the pumpkin. Then I carefully sprinkled on the glitter. I let that dry and then repeated the same process, starting where that layer of glitter met the white of the pumpkin, except this time I sprinkled on an even lighter layer of glitter. This was how I tried to achieve the ombre look.

Once that was all dry, I brushed on a light layer of Mod Podge over the entire pumpkin so that the glitter and gold leaf would be set and not flake off. I let that dry completely and then painted the stems with the gold leaf paint. For the pumpkin on the right, I went more glittery and the pumpkin on the left is more gold leaf. 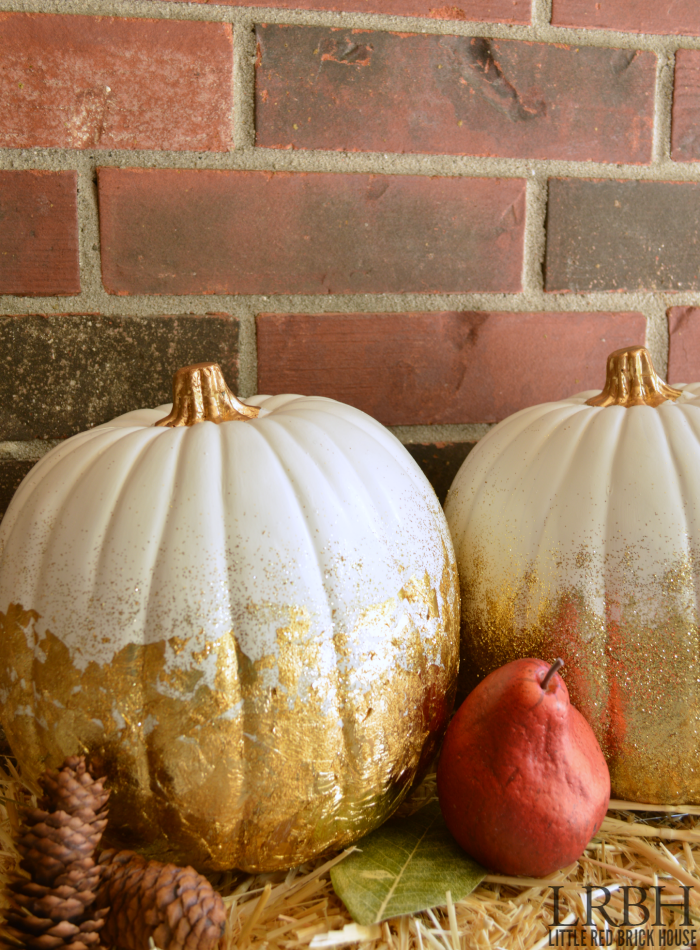 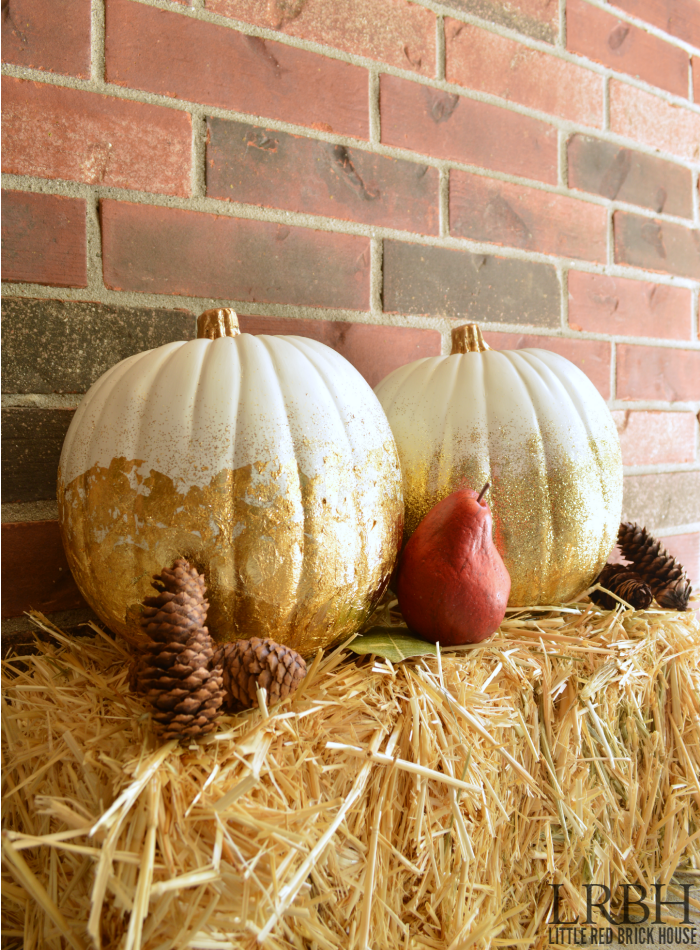 This was definitely a process and if you’re thinking of trying it, I recommend exercising a lot of patience. Also, when using the gold leaf paint, I suggest using it outside in a well ventilated area. That stuff will make you higher than a kite.

Don’t forget to head over to see what each of my buddies did with their pumpkins!

Creativity has been a huge part of my life since I was a little girl, and now that I have a home of my own, that love of creating has spilled over into decorating. My hope is to inspire others to dig deep to find their style and creativity so they can turn their home into a place all their own.

Show of hands....how many other people are still d

TGIF! This week has been a doozy! Between all of t

Happy Sunday, y’all! The boys are headed out for